Gluten sensitivity is a digestive disease newly diagnosed that can affect up to 10% of the population. However, 95% of patients do not know that they suffer from it although they suffer its symptoms. In CMED we offer a specific program for its diagnosis and treatment.

Diagnosis and Treatment of Gluten Sensitivity

Gluten is a glucoprotein found in cereals normally consumed such as wheat, barley, rye or oat and in other cereals less frequently consumed such as spelt (also known as wild wheat) and titricale (cereal mixing wheat and rye). In turn, gluten is composed by another two glycoproteins: gliadin and glutenin.

Gluten is responsible for the elasticity of the flour dough which allows that along with fermentation, bread obtains volume as well as the elastic and spongy consistency of oven-backed doughs.

How can gluten affect us?

Gluten is a very nutritive and beneficious protein for all people but is also difficult to digest. The reason is that our body does not have the necessary enzymes to digest it completely and these small pieces which are not digested are the ones that tend to cause intestinal problems.

Healthy people do not feel discomfort when taking any cereal containing gluten, at the most a slight discomfort that passes once the digestive process has ended. However, in other people, these small pieces of gluten that are not digested may cause autoimmune problems (celiac disease), allergic (such as respiratory, food or contact allergies) and sensitivity to this protein.

As it is present in the main cereals used in our diet, The Association of Celiacs of Madrid considers that it would be necessary that all meals containing gluten were labeled as such to avoid problems in people with any pathology related to this glucoprotein such as celiac disease or gluten sensitivity.

What is gluten disease?

It is an autoimmune disease which main feature is the permanent and chronic intolerance to gluten. People suffering from it are genetically predisposed and it features an injury in the mucous of the small intestine causing atrophy of intestine villi. This atrophy causes an inappropriate absorption of the nutrients of the meals we take (proteins, fats, carbon hydrates, mineral salts and vitamins) with the subsequent health related problems.

La Prevalence of celiac disease in Spain is of approximately 1 per 100 people.This turns it into the most frequent intestine chronic disease in our country. Moreover, its genetic component justifies the existence of more celiac patients in one same family. Despite it is the most studied gluten sensitivity and better known, today still 6 out of 7 celiacs are undiagnosed.

What is gluten allergy?

Allergy to gluten affects a very low proportion and may be developed at any age: from babies to adults. It is caused by an immunological response of immediate hypersensitivity.

Its presentation is varied, from a simple itch around the mouth to a serious anaphylactic shock. Unlike other conditions related to gluten, symptoms of an allergy to gluten are at first hard, minutes after the intake, causing even a serious clinical conditions in no time.

What is gluten sensitivity?

It is a newly diagnosed disease closely related to celiac disease. Patients with gluten sensitivity cannot be qualified as intolerant or allergic but still these proteins harm them. Its symptoms are very similar to those of the celiac disease and share some of them with the allergy to wheat so accuracy in diagnosis is essential.

The greatest problem of this new pathology is the under diagnosis of patients as it is not identified and even unknown in many cases. In Spain it is estimated that over 10% of the population is sensitive to gluten and over 90% are undiagnosed.

How to diagnose gluten sensitivity?

Diagnosis is essential when treating patients with gluten sensitivity as only with symptoms it is very difficult to make a difference between celiac disease or gluten allergy despite there is a greater number of symptoms which are not digestive (pain of limbs, numbness of arms and feet, fatigue).

CMED medical team and Clínica Ojeda use six tests which are determinant when diagnosing this disease:

Depending on the gluten-related disorder suffered by the subject, specialists will state the most appropriate treatment. In case of allergy and celiac disease, it is essential to avoid these meals.

In the specific case of gluten sensitivity and given that a specific biologic marker has been identified for this disorder, treatment would aid to confirm this diagnosis and consists in diets of elimination with subsequent introduction observing clinical changes in both periods. .

Program for the detection and treatment of gluten sensitivity 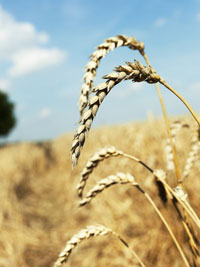 CMED and Clinica Ojeda have reached an agreement to offer all people with suspicion of suffering gluten sensitivity the best services and professionals of both centers for the diagnosis and treatment of this disease.

CMED is the first high resolution center specialized in digestive pathologies in our country. Gastroenterologists, surgeons of the digestive system, endoscopists, endocrinologists and nutritionists and psychologists of CMED offer the patient a global and personalized assistance in each of its visits to the center.